These doggies were imported to America in the late 1800s for use as farm doggies, where a slightly larger version than their English cousin was desired. By the 1930s, AmStaffs had become immensely popular as family pets, with Pete the Pup (Petey) of Our Gang (The Little Rascals) being one of the most popular. In 1936, the Staffordshire terrier was registered as the American variant (changed in 1972 to the American Staffordshire terrier).

AmStaffs are smart, confident, and good-natured companions. They have legendary bravery. A well-socialized, responsibly bred AmStaff will always be a devoted and trustworthy companion.

AmStaffs are stocky bull-type terriers with a shoulder height of 17 to 19 inches. The jaws are finely defined, the cheekbones are prominent, and the dark, round eyes are set far apart. The AmStaff moves with grace and agility, with a springy gait that displays the breed’s inherent confidence. Many colors and designs are available for the stiff, glossy coat.

AmStaffers describe their doggies as being hyper-aware of their surroundings, up for anything, and delightful ‘personality doggys’ in the house. Mental and physical obstacles are appealing to AmStaffs. As their numerous ventures into show business reveal, they are very trainable.

There’s just one way to get an AmStaff: do your research and find a competent AKC breeder.

This breed has incredible strength and is every inch the athlete. It is swift and nimble, despite its brawn. The large head with powerful jaws can be scary, yet the face normally has a pleasant expression and is usually accompanied by a short, but not docked, wagging tail.

It is preferable to leave the ears in their natural rose shape, even if they can be cut. This doggy is large for its size, weighing anywhere between 45 and 70 pounds (20 to 32 kilograms). Its height varies between 17 and 19 inches. The coat is slender and short. Any hue is okay, although a coat that is more than 80% white, black and tan, or liver is the least desirable.

American Staffordshire terriers are built like fuzzy fire hydrants, standing roughly 19 inches tall yet packing a robust 40–70 pounds of strength into their little frames. With their strong, muscular necks, barrel chests, and slim hindquarters, the AmStaff has a distinct presence.

AmStaffs come in a range of colors, the most frequent of which are liver, sable, brindle, and brown, with some white on their heads and chests. Their short, rigid coats have no undercoat, making them easy to care for but also making them more susceptible to cold weather.

They have large, intelligent faces and dark-colored eyes, while blue eyes are occasionally seen. Their tails are short and taper to a point, compared to the rest of their bodies.

The AmStaff should thrive on high-quality doggy food, whether purchased or produced at home under the observation and consent of your veterinarian. Any diet should be tailored to the age of the doggy (puppy, adult, or senior). Some doggies are prone to becoming overweight, so keep an eye on their calorie intake and weight.

Treats can be an effective teaching tool, but too many can lead to obesity. Find out which human meals are OK for dogs and which ones aren’t.

The short, stiff coat of AmStaff is surprisingly easy to keep clean. A once-over with a soft bristle brush once a week should be sufficient to remove any debris or foreign materials. Brushing evenly distributes skin oils throughout the coat, which keeps it healthy.

If an Am Staff member gets into something exceptionally filthy, a bath will almost certainly be required. Otherwise, bathing might be postponed until he develops a ‘doggy’ odor. The AmStaff’s nails, like those of all breeds, should be trimmed on a regular basis, since long nails can be uncomfortable and cause problems for the dog while walking and running.

Make sure your American Staffordshire terrier has plenty of enrichment options, like training, exercise, and games that will keep their mind and body challenged.

Doggy Body LanguageSeptember 3, 2021
Things To Know Before Breeding Your DoggySeptember 18, 2021 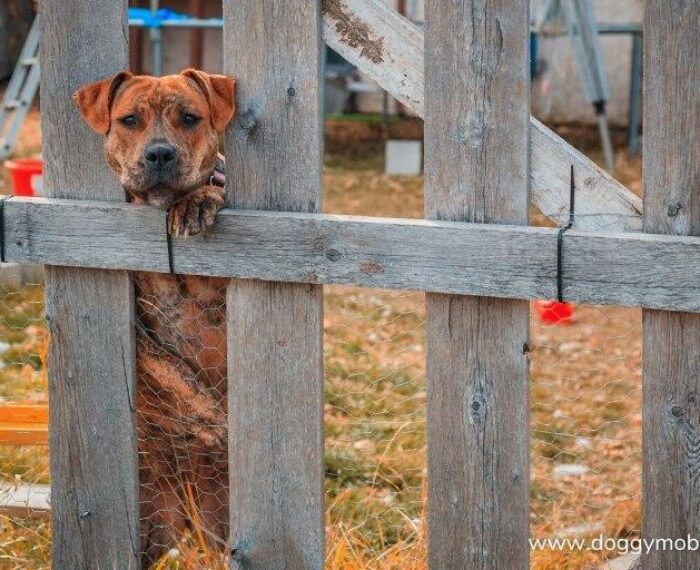