Blue Heelers can be a one-person dog. They are very independent, which does not require much in the way of cuddling or affection. Blue Heelers are cautious and wary pets — these are good qualities that make them excellent guard dogs. A lot of people consider Blue heelers to make excellent family dogs. They can be outdoor dogs as well, but they also love to be inside with the family. When given the right amount of exercise and mental stimulation they make good house dogs. They are extremely loyal to their family and are very loving and affectionate.

You guys might be wondering why we’ve been talking a lot about Blue Heelers and our fascination with this breed. In the previous blog we made, we were planning to introduce our newest Blue Heeler mascot. This would be a great time to know more about Doggy Mobile Apps newest mascot Rocko! He is one of our Staff Members Blue Heelers. Here is his story…

Rocko was born on 11/11/10 and I picked him up on New Year’s Eve so he was just over a month and a half when I got him. My friend is a Vet Tech and her friend (who is also a Vet Tech) had a blue heeler (Rocko’s Mom) and a red heeler (Rocko’s Dad) that had a litter. I grew up with bigger dogs and never thought of getting a smaller dog, but I had been praying for a dog when I was hiking on the trails here in Colorado so this seemed like I should at least take a look. I made my way to the apartment complex where the puppies were and played with most of them. I don’t know if you have seen blue heeler puppies, but they really are the cutest puppies. Most of the puppies were female, but I was looking for a male dog (I grew up with bigger female dogs and was looking to see how males differed). There was only 1 male left and he made me laugh when I was there. All of his sisters would play fight with him and would handle himself. He was mouthy and just funny. I asked if he was available and she said no he was taken, but if the person does not pick him up today, I could have him (I think she might have been waiting on this person for a while). I asked her to let me know. She called me a few hours later and said he was mine. I grabbed a crate for the car and headed over. I remember a couple of things when I left, 1 was the litter owner was crying when he left, she said she cried when they all left and I believed her (she was very sweet). And 2, Rocko fit in the palm of my hand when I was walking out to the car. We got home, I had a couple of glasses of champagne (it was New Year’s Eve), and he’s been with me ever since.

We have hiked all throughout Colorado. From Matthews Winters at Red Rocks to Lake Mohawk atop of Breckenridge to Washington Park in Denver. He is the best dog I’ve ever had. He has also made me love this breed so much that I went and rescued Jonah (my other blue heeler) from a Cattle Dog Rescue here in Colorado. These dogs are the smartest and toughest dogs I’ve ever seen. I’ve always said it takes me 3 beers to teach Rocko a trick…lol and Jonah is very protective (rescues normally are). If you are active and like the outdoors…blue heelers would be for you.

My boys are getting older now. Rocko is almost 10 and Jonah is almost 8. Rocko has been diagnosed with Progressive Retinal Atrophy which has limited us some, but not all. We still go on the trail and to the park to play chuck it. Rocko is the only dog I’ve ever seen that trusts his owner so much he will run out there (basically blind) and find the ball by hearing the bounce or the movement in the grass…amazing. Jonah has taken on the responsibility of protecting Rocko since his eyesight has gotten progressively worse (it’s very sweet to see), which has been a blessing. He guides Rocko on the leash and even gives him a kiss every once in a while when he’s doing good (it melts my heart).

I’m very happy to say Rocko has been chosen to be the mascot of Doggy Mobile Apps. We will be talking about his breed, his eye condition, along with his daily life. We will also talk about his diet (I switched my boys from kibble to raw several years ago) and how to get in contact with a heeler to rescue. We are looking forward to posting and seeing your responses. 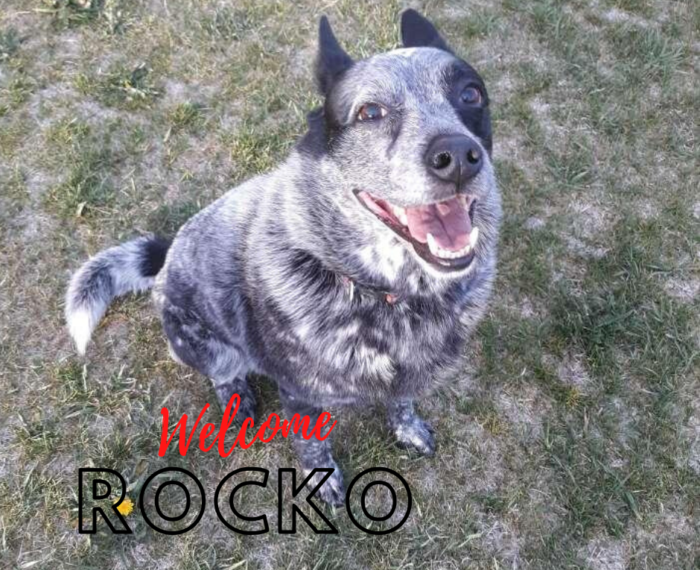